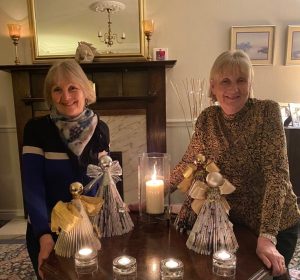 “We’d seen similar ones at a Christmas craft fair the year before, and hoped we could raise some funds in David’s memory,” says Marilyn.

“We scouted for old books in charity shops and used colourful paper from free glossy food magazines – the ones from Marks & Spencer and Asda were particularly good! Once the shops were stocking Christmas baubles we really got going.”

Friends, family and their work colleagues spread the word and soon orders were flooding in. Marilyn says her house became like a production line with Glenis’ daughter Georgia helping out too.

“It was something that I really needed to do at the time,” she says. “We were all still in shock from losing David and it was a comfort knowing that I was doing something positive.”

“I’ve always been a bit ‘crafty’, but I’ve not done anything on this scale before. While we’re not planning to do it again this year, I do have an order for three angels to make for my cousin’s daughter, and I quite fancy having a go at making snowflakes, so you never know!”