“I have absolutely no idea why the he chose Snowdon,” says Edward’s mum, Estelle, “but it seemed as good a challenge as any, and since we’re a very outdoorsy family, I knew it was something we could do.”

But as it turned out, it wasn’t conquering the 1000m peak that was the challenge, it was the weather! 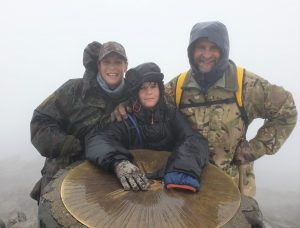 Says Estelle: “The plan was to take the PCRF banner to the top of Snowdon and take photos with the glorious view behind us, but as you can see from the photos we took, it wasn’t that kind of day! The conditions were so atrocious we were worried that unfurling the banner would act as a kind of sail and we might get blown off the side! We ended up touching the marker stone at the top, taking a few quick snaps, then setting off straight back down!”

“I was beyond proud of Edward’s thoughtfulness in wanting to do something that could help other people,” says Estelle. “Our three boys, Finley, Edward and William were all close to my dad – Edward particularly so – and in fact Edward is the essence and image of his grandpa.  While they didn’t see each other very often – my dad lived in Florida – they were in touch all the time through technology, messaging and video calling.

“Pancreatic cancer is such a cruel disease. Dad was diagnosed in late 2019 and had a successful Whipple procedure in February followed by twelve lots of chemotherapy and his doctors were really hopeful about his prognosis. But a scan on Christmas Eve last year showed that it had returned, and he died in March. I was on the first available flight to Florida to see him but he died while I was in the air.” 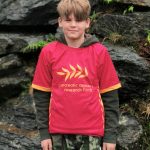 Edward completed his Snowden challenge with his friend Max, who had also lost his granddad and was fundraising for the British Heart Foundation. Both boys raised over £1200 for their chosen charities.

Maggie Blanks, PCRF’s Chief Executive said: “Congratulations to Edward and Max – I’m sure both your grandads would be incredibly proud of your achievements!  We understand that Edward has half an eye on climbing Ben Nevis next, so we’ll keep our fingers crossed for sunshine if that happens!”