Cancer stem cells, or CSCs, have the ability to grow into different kinds of cancer cells and enable the growth of tumours. They are also very resistant to chemotherapy and are often the route by which cancer returns and spreads following treatment. Not only can they renew themselves, but they can generate all of the other types of cells that are found in a tumour.

In previous research funded by PCRF at Queen Mary University of London’s Barts Cancer Institute, scientists discovered that, unlike other cancer cells, CSCs need oxygen for their energy supply. For this they rely on the powerhouses of the cell, known as mitochondria.

In the newest research, the scientists investigated the dynamics driving mitochondria in different types of cells, and how those related to the activity of CSCs. For mitochondria to work perfectly, the processes of fission –where one mitochondrion divides into two – and fusion – where two become one – must be in balance.

After looking at genetic data taken from normal pancreatic tissue and from tumour tissue, and also comparing the genes present in ‘normal’ cells and CSC cells, the researchers found that the gene representing mitochondrial splitting was overexpressed – in other words that more copies were present – in cancer stem cells. This is why the process of mitochondrial splitting is especially active in CSCs and also seems to be linked to their aggressive characteristics.

By then treating the cells with a chemical which inhibited that gene, researchers were able to prevent the mitochondria from working. This resulted in an accumulation of ineffective mitochondria, which resulted in a lack of necessary energy and the subsequent death of the stem cells. 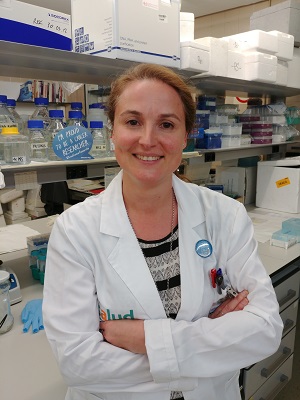 Inhibiting the mitochondrial activity prevented the aggressive characteristics and made the tumour much more sensitive to Gemcitabine, a standard chemotherapy treatment.

Dr Patricia Sancho, who led both studies and is now at the Institute for Health Research in Aragon at the University of Zaragoza, Spain, said: “Our data suggested that inhibiting mitochondrial fission could be a really attractive target for potential new treatments and therapies to fight pancreatic cancer.”

Dr Sancho is continuing her research in Spain, trialling different inhibitors. She explains: “The inhibitor used in our study was a good starting point, but we need to be able to test any compound in animals in combination with chemotherapy – and later on in humans. So we are collaborating with a group of chemists here to test a library of substances that have already been approved for in vivo/human use. We hope to find one that will be successful, rather than starting from zero.”